Is It All In The Genes? Gut Health And Neurodevelopmental Disorders

This blog explores what is going on in the majority of neurodevelopmental conditions and most importantly, where to go from here.

In order to truly understand and unwind the various imbalances impacting your child’s health, it is important to identify the problem or dysfunction occurring.

However, it is even more important to understand why.

Like most of us, I know that good health and healing is a natural function of the body. If I step on a rock and cut my foot, I expect it to heal.

So why are our children not experiencing optimal health and function? Why aren’t their bodies healing as well?

The answer is quite simple. However, to understand healing and health, you must first study health and how healing happens.

Is it all in the Genes?

The current prevailing story is that autism, ADHD, OCD, ODD and many mental health issues are predominantly an issue of genetics. It says that our genetics are the cause of these problems and that there is little that can be done.

While the genes are indeed important in the development of certain neurodevelopmental disorders, the genetic theory as their sole cause completely ignores scientific data showing otherwise.

You see, you cannot have a genetic epidemic. It is impossible. Genes don’t change that rapidly. Even still, if genes where the primary cause, the fact that the majority of individuals with autism do not have children would suggest that the rates of autism would be on the decline or at least have leveled out. This is not the case. The rise continues and many believe that the end is not in sight.

Two of the largest studies on the incidence of autism have shown that only 50% of the over 800% increase can be attributed to better and earlier diagnosis. The authors of both studies concluded that the other 50% increase must be due to the environment.

The old model of autism, ADHD and other neurodevelopmental disorders being a purely genetic issue is quickly falling away to the rational and scientifically supported position that these disorders are largely due to environmentally induced or stimulated autoimmune responses in genetically predisposed individuals.

“After twenty years of searching for the gene, or genes, and the expenditure of untold millions of dollars, no single gene, or set of genes, has been found. Possible gene loci have been identified, but what is very clear is that autism is a polygenetic condition with the environment probably playing a significant role in the expression of genetic factors. It is no longer genes versus environment – it is genes and environment!”

The result is whole body dysfunction with symptoms specific to each of those systems being in a state of dysfunction.

Dr. Hardy describes this process quite well in the graphic below. 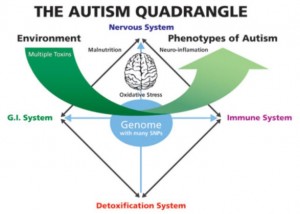 As you can see, the problem is a cyclic one as each system influences the other. Major gut dysfunction is a hallmark in a large percentage of individuals with autism, ADHD and other mental/emotional health problems. In a nutshell, problems with the gut result in a leaky gut which allows pathogens, proteins, and other materials to enter the bloodstream and produce a chronic and consistent autoimmune inflammatory response. This causes brain inflammation and the resultant changes in brain structure and function.

Combine this with a compromised or injured nervous system and suboptimal detoxification systems and you have a recipe for a chronic neurodegenerative condition.

While this process of chronic cyclic dysfunction, inflammation, and autoimmune responses is quite daunting, it is a process that can be halted and reversed. Many children have seen tremendous leaps in health and function even when their parents have been told that nothing could be done or their condition was incurable.

If you study the graphic above, it should become very clear what the interventions should be.

They should be those approaches, therapies, and procedures aimed at supporting and strengthening the function of reparative processes of the nervous, gastrointestinal, immune and detoxification systems.

This approach has helped thousands of children impacted by various neurodevelopmental disorders including my own son who has seen tremendous growth and healing by following these guidelines and what I will be sharing over the next few months.

The truth is that no matter what an individual’s genetic situation and state of health, strategies, and techniques can be employed that can improve their quality of life. Depending on the stage of the disease process, when it started and a person’s individual genetics, their recovery and healing process will vary accordingly. Nonetheless, there is always room for improvement in the quality of life.

Now that we’ve identified the problem, the next series of emails will now start to dive into ways to strengthen and support each of those systems we discussed to help improve the health and function of your child.

For more information on this topic, I highly suggest reading Dr. Hardy’s webpage.

For a more in-depth look at this topic, I encourage you to read Gut and Psychology Syndrome which can be found on Amazon here.

P.S. Do you know someone who could benefit from this info? Consider forwarding it to them so they can benefit from it as well!

Sit Up Straight! Where Is Your Child On The Pyramid Of Learning?

Benefits of the Mediterranean Diet